Nancy has been involved with the United Methodist Women since shortly after we moved to North Carolina in 1997, along with many other local community act ivies. In recent years it has become a major focus of her energies.

UMW is an international organization serving women and children, affiliated with the United Methodist Church. The website of UMW can be found here.

Starting with a Local UMW Unit

Not long after we settled in Boone Nancy joined the nearby Hopewell United Methodist Church, and became active in the UMW unit there. Before long she was Secretary and Treasurer of that unit.

When the Hopewell UMC closed she moved to the Boone United Methodist Church, where she serves as Treasurer.

As her interests in the organization grew, Nancy became an officer in the North Wilkesboro District, the district that then included the Boone area.

She first served as Program Resources Secretary, providing books and other materials for sale to members at district functions. After four years of ordering, toting car loads of books, and managing all the associated paperwork, she moved on to become District Treasurer.

When UMW in western North Carolina re-organized from eleven districts to eight, Nancy accepted the position of President of the new Appalachian District. She continues to serve as webmistress of the District. You can view the District's website if you like.

After three years as District President, Nancy was asked to become Treasurer of the Western North Carolina Conference, becoming a member of the Conference executive committee and interfacing with the eight District Treasurers.

Honored for Her Contributions 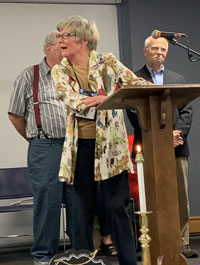 In September 2019 Nancy's contributions to United Methodist Women were recognized at the Conference Annual Celebration at Lake Junaluska, North Carolina.

For photos and videos of Nancy's reactions to this surprise announcement, see our 2019 Honoree page.